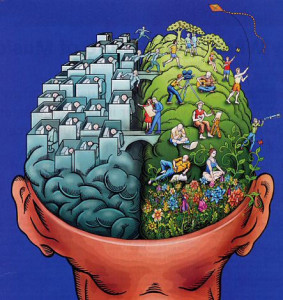 Do we really believe the enhanced versions of ourselves that we offer up to the world? How accurately do we really perceive ourselves, especially when looking at our astrological horoscopes? In a survey of a million high school seniors, 25% considered themselves in the top one percent and only 2% considered themselves to be below average. Even amongst university professors 94% said they did above average work. Psychologists call this tendency for inflated self-assessment the “above-average effect” and it has been documented repeatedly in numerous contexts from driving ability to managerial skills. This kind of inflation has been found amongst all types of people, from military men to doctors and particularly in the corporate world, despite opposing opinions from their superiors, subordinates or patients. However, when we look at the texts on spiritual awakening, we see that it is humility which is said to be the greatest quality, the true symptom of progress. “One should be more tolerant than a tree, lower than the straw in the street” (Chaitanya Mahaprabhu, 16th century saint). This is because spirituality teaches transcendence of the ego. The symptoms of awakening are detachment from the false ego, from the temporary body and mind.

Nevertheless, in the mundane world the stronger the threat to feeling good about yourself, the greater the tendency to view reality through a distorting lens. In his classic book “How to win friends and influence people” Dale Carnegie described the self-image of famous mobsters of the 1930’s. Dutch Schultz, Al Capone and others simply saw themselves as business tycoons or benefactors of the people. Ironically people tend to recognise that inflated self-assessment and overconfidence can be a problem – but only in others. So what’s actually going on here? In 1959 the psychologist Milton Rokeach placed 3 psychiatric patients together in a state hospital. They all believed they were Jesus Christ. Since at least two of them had to be wrong, he wondered how they would process this idea. It turns out that one did relinquish his belief, the second saw the others as mentally ill, while the third managed to dodge the issue completely. So in this case two out of three patients managed to hang on to a self-image at odds with reality. The disconnect may be less extreme, but the same could be said to be true of many of us. We may even – if we simply bothered to pay attention – notice that our self-image is not quite in synch with the objective image that others have of us. Generally our ego fiercely fights to defend its honour. It used to be just lunatics, but today it is accepted by researchers in psychology that even normal healthy individuals tend to think of themselves not just as competent, but even proficient, even if they aren’t.

Consider in this analogy how the mind uses two ways to get to the truth: the way of the scientist or the way of the lawyer. Scientists gather evidence, form theories explaining their observations, then test them. Lawyers begin with a conclusion they want to convince others of, and then seek evidence that supports it, while attempting to discredit evidence that doesn’t. The human mind is designed to be both a conscious scientist seeking objective truth and an unconscious lawyer impassioned in the search for what we want to believe. And these approaches compete in our minds to create our world view. Ultimately the usual direction in thought processes consistently tends to point from belief to evidence, not vice versa. So it turns out the brain is a decent scientist but an outstanding lawyer. Thus when we paint our self-image, the unconscious blends fact and illusion, exaggerating our strengths and minimising our weaknesses. The conscious mind then innocently admires the self-portrait we create, believing it to be a work of photographic accuracy. Psychologists call this approach taken by our unconscious lawyer mind “motivated reasoning”. It helps us believe in our own goodness and competence, to feel in control, and to see ourselves in an overly positive light. Fortunately our minds have a great ally: ambiguity. This helps us build a narrative of ourselves, of others and of our environment that fuels us in good times and gives us comfort in bad. As a result our unconscious mind can choose from a whole menu of interpretations to feed our conscious mind. In the end we feel like we are chewing on facts, though we’re actually snacking on a preferred conclusion. In fact biased interpretations of ambiguous events are at the heart of some of our most heated arguments. Researchers have stated that “ The same sensory experiences emanating from life, transmitted through the visual mechanism to the brain…give rise to different experiences in different people…There is no such thing as life existing out there in its own right which people merely observe.” Even amongst scientists, people’s views of the evidence are highly correlated to their vested interests. Studies have shown that research physicians with financial ties to pharmaceutical companies are significantly more likely than independent reviewers to report findings that support the sponsors’ drugs and less likely to report findings that contradict it.

Researchers have mapped in the brain the differing literal pathways used in computing cold, objective analysis versus other pathways used on emotionally laden moral judgements. So what techniques of subliminal reasoning do we employ to support our preferred world views? Our conscious minds are not total fools, so “motivated reasoning” won’t work if it stretches credulity too far, for then our conscious mind would start to doubt and the self-delusion game would be over. The balance must maintain the “illusion of objectivity.” Of course in some spiritual circles, sometimes profoundly abstract or unreal scenarios are presented as gospel, and it is then that the adherents seem to apply what could be called “suspension of disbelief”. This is the same strategy used by the mind when watching a movie, for example. Even though we know we are safely seated in our chairs at home or in a theatre, still we become gravely fearful, or tragically sad, as if the scene were real. Similarly, even when we are told religious truths that totally contradict our knowledge and experience of reality, we don’t disbelieve them, but rather we suspend our usual disbelief and we take on board that very “truth”, sometimes for better, sometimes for worse.

We all like to bolster our preferred views. People find reasons to support their political candidate despite serious credible accusations of wrongdoing, but take even third-hand negative rumour about an opposing politician as proof of their incompetence. Similarly when we want to believe a certain fact, even numerous scientific researches to the contrary will not give us reason to disbelieve. This is exactly what happened in the climate change debate. Through “motivated reasoning” each side finds ways to justify its favoured conclusion and discredit the other, while maintaining a belief in its own objectivity. And so those on both sides of important issues may sincerely think that theirs is the only rational interpretation. Those who disagree with us are not necessarily duplicitous or dishonest in their refusal to acknowledge the obvious errors in their thinking. More important, it would be enlightening for all of us to face the fact that our own reasoning is often not so perfectly objective either. It is an old cliché, but the experience of walking in the other person’s shoes does seem to be the best way to understand their point of view. And research suggests that the subtlety of our reasoning mechanisms allows us to maintain our illusion of objectivity even while viewing the world through our biased lens. Our decision-making process does not break the rules, but it bends them and we perceive ourselves as forming judgements in a bottom-up manner, using data to draw a conclusion, while we are in reality deciding top-down, using our preferred conclusion to shape our analysis of the data. So when we apply “motivated reasoning” to assessments of ourselves, we produce that positive picture of a world in which we are all above average.

Taken a step further, even Steve Jobs, the founder of Apple, was famous for his ability to create what has come to be called a “reality distortion field” where he convinced himself and others that they could accomplish whatever they set their minds to. And everyone has this gift in their unconscious, built upon our natural propensity to engage in “motivated reasoning”. For, according to some, belief in oneself is ultimately a positive force in life. Our unconscious is at its best when it helps us to create a positive and fond sense of self, a feeling of power and control in a world full of powers far greater than the merely human. Psychological literature is full of studies showing the personal and social benefits of holding positive “illusions” about ourselves. “Motivated reasoning” enables our minds to defend us against unhappiness, and in the process it gives us the strength to overcome the many obstacles in life that might otherwise overwhelm us. The more we do it, the better off we tend to be, for it seems to inspire us to strive to become what we think we are. “Fake it ’til you make it”, as they say. Otherwise – ironically – studies show that people with the most accurate self-perceptions actually tend to be moderately depressed, suffer from low self-esteem, or both. Perhaps they would fit in with the spiritually aware who have realised their true nature and the fallacy of their ego. Yet psychologically speaking, overly positive self-evaluation, on the other hand, is considered normal and healthy. So apparently as we confront the world, unrealistic optimism can be a life vest that keeps us afloat. I wonder who is right. What do you think?

References:
Subliminal – The new unconscious and what it teaches us; by Leonard Mlodinow (2012)
Caitanya Caritamrita; translation and commentary by A.C. Bhaktivedanta Swami; BBT

Make everything as simple as possible, but not simpler.
Albert Einstein