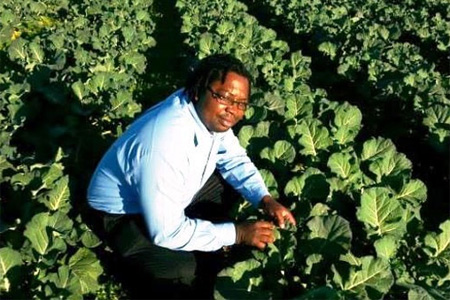 The landowner, N7 Meat, gave up farming crops on the land, claiming losses of over R1m, GroundUp reports.

Albert Zinhanga and four friends met the landowner when buying an ox for slaughter at N7 Meat in 2014. Noticing fallow land, they asked why it was unutilised. The farmer said it was unprofitable and if the Zimbabweans refused to believe him, he said they could try and farm it for free for a year. They could use his farming equipment and only pay for electricity.

He bet them they could not make a go of it.

According to Zinhanga, a teacher of African languages at Cravenby High School in Parow, the farmer was told it would cost R300 000 to correct the pH of the soil. He didn’t want to invest further and continued concentrating on rearing sheep, cattle and pigs elsewhere on his farm.

Zinhanga has four partners; one has a doctorate in agriculture, the others have degrees in physics, science and engineering.

“We never dreamt or even thought that one day we will be farmers,” said Zinhanga. “We were just a group of academics driving around buying farm products.”

The five men tested the soil and the water and it seemed good to them, albeit sandy. To counter this, they say they watered continuously before planting any crops. They planted three hectares in all, with tomatoes, cauliflower, broccoli, spinach and maize.

Neighbouring farmers, watching the developments, came to them and gave advice. They also introduced the men to Cape Town Epping Market to sell their produce.