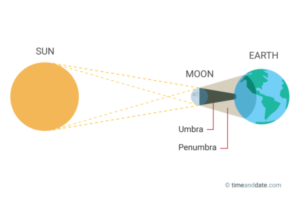 The immanent  total solar eclipse of 9 March at 03h58 Central African Time (01h58 GMT) occurs at 19 degrees of Pisces. We won’t get to see it in its totality this time, unless you’re in the Pacific of course, around Hawaii or Indonesia.

Those in Northern India and Nepal will potentially be exposed to a partial eclipse at sunrise on the 9th, so the temples may actually be closed for the morning worship that day. It may be better to delay cooking or eating your breakfast until after the whole eclipse experience is over in that case. Other countries who could get a partial eclipse sighting include Indonesia, Malaysia, the Philippines, and Papua New Guinea, as well as Cambodia, Myanmar, Vietnam and Thailand who will see about 50% of the Sun partially  eclipsed. Also Australia, China, Japan and Alaska who will see a less than 50% partial eclipse. 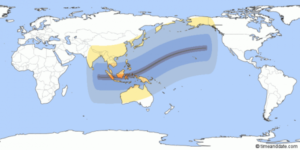 Although the eclipse will remain total for 4mins 10sec, peaking at 01h58 GMT, the phenomena actually begins for some viewers before midnight on the 8th already, and goes on until 04h30 GMT before it is completely over. So temples in Africa should definitely delay even beginning to cook breakfast until after 06h30 local time. It is considered most inauspicious to prepare our eat a meal during any eclipse phenomena.

In astronomical terms a solar eclipse occurs when the Moon passes between Earth and the Sun, thereby totally or partially obscuring the vision of the Sun for us on Earth. But this kind of thing happens every month so why don’t we have an eclipse every month? Well the Moon’s actual orbital path around the Earth is inclined at an angle of 5° to the Earth’s orbital plane (ecliptic) around the Sun, so the 3 bodies don’t always align exactly every month at the new moon. However, the points where the 2 orbital planes meet are called  lunar nodes and a solar eclipse can only occur when a new Moon takes place near a lunar node and the triple alignment is exact. It is a case of simple geometry and shadows, not – as described in the Vedic texts millenia ago – a demon’s disembodied head swallowing the Sun. That unfortunately is pure allegory, and to believe otherwise is a symptom of naivete and ignorance of the facts available to us today. 10 000 telescopes can’t be wrong, by which I mean that there are thousands of professional and amateur astronomers across all countries of the earth today who are able to point their telescopes at the Moon and observe directly what is going on in the sky. And so the proof is apparent to all that Rahu and Ketu – as the north and south nodes are called in the Vedas – are not even some other planetoids blocking the Sun either. That is an outdated speculation that no longer holds water in the age of the telescope. And these telescopes are huge.

The Moon is but a stones throw away for some giant observatories, of which one of the biggest in the world’s happens to be just up the road from me, in the Karoo desert, in a town called Southerland if you want to prove it to yourself. Don’t let that eclipse your faith in the ancient Vedic texts though. Science is only now coming to the same conclusions about the nature of matter and the composition of the universe that the Vedas were presenting thousands of years ago, so it is a matter of interpretation, balanced with logic when hearing the Vedic conclusions. The Vedas are alluding to transcendent truths that our earth-bound minds will never comprehend via mere sense perception and logic, and this we require their illuminating insights to reveal to us the bigger picture of reality in that sense. But as for the Moon, that is now in the domain of science and technology, since Galileo several hundred years ago already, when even he was labelled heretical by the church for his contradictory scientific observations. Observations which eventually were undeniably accurate, forcing the church to rewrite its dogma of when the earth was created and just where it lies in God’s great galaxy.

Another discovery by astronomers is that our Earth’s orbit around the Sun is not purely spherical or round but in fact elliptical, slightly stretched. So we are sometimes closer to the Sun (perihelion) and sometimes further from the Sun (aphelion) than usual. Simultaneously the Moon’s orbit around us is also elliptical and so our distance from the Sun and the Moon’s distance from Earth varies throughout the year. And as a result the Sun and Moon’s apparent sizes vary accordingly. That’s why the Moon does indeed occasionally appear bigger than usual to the naked eye. Also it is only when the Moon is closest to the Earth (lunar perigee) that it’s apparent size matches the Sun’s. And this is the only time a total solar eclipse can actually occur. So as you may have guessed, the Moon happens to be at that very point of perigee within 24 hours of the New Moon on the 9th. In the current trending vernacular this would then be known as a supermoon, although there is nothing super about it, except maybe it’s size. And of course it’s effect on the ocean tides, which will be more extreme than usual due to the increased gravitational pull. So watch out for that. And if it can affect the tides, what increased effect might it have on us? Let’s wait and see. Pisces, where the alignment occurs on the 9th, is a mutable water sign too, renowned for its increased sensitivity, emotional and psychic  receptivity as well as the ability to access greater levels of transcendence.

With Jupiter within one degree of an exact opposition to the conjuncting Sun and Moon, and thus also involved in the alignment, we can expect some degree of positive enthusiasm, as long as we don’t come across as self-righteous, and we avoid overdoing it. Indulgence and spending should be watched, and the potential positive Jupiter influence can then be harnessed for our spiritual or health benefit. Meeting the doctor, priest or teacher could be helpful as long as our own  arrogance is kept in check. There is nothing worse than an over-inflated ego to blind us to the insights that could be offered from such a beneficial meeting. So good luck with that.