This week the Sun is in an earthy Grand Trine alignment with Jupiter and Pluto, bringing with it tremendous opportunity for personal growth and insight. 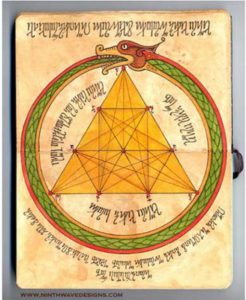 The Sun is within 3 degrees of an exact 120 degree trine alignment with Jupiter today and at its usual rate of 1 degree a day, will be exact by Tuesday 3 May. It then moves toward an exact trine alignment with Pluto on Saturday 7 May. So for this entire week the influence of the Grand Trine will be available to us as a boost to our lives.

When two planets align at this angle in the same elemental signs – this time earthy Taurus and Virgo – it’s called a trine, which facilitates a healthy blending of the two planetary archetypes concerned. But when three planets align like this all in the mutual elements, it’s called a Grand Trine, and the three planetary archetypes are available to be harnessed for the duration of the alignment. We can allow for an orb of about 5 degrees as the faster-moving planet (in this case the Sun) approaches the exact angle. In other words from today, as the Sun approaches the focal planet of the three – Jupiter – already the influence of the alignment will be operational. Then by Tuesday 3 May the alignment becomes most potent, and as the Sun moves onward it approaches the alignment with Pluto, becoming exact, or again particularly potent by Saturday. Throughout this first week in May 2016 then we can expect the influence to be present.

Now Jupiter is already in its Trine aspect to Pluto, albeit with an orb of 4 degrees, and this part of the alignment thus is already facilitating in us wonderfully increased organizational ability or opportunity that can be useful in business, education and general public welfare, particularly where the recipient of the input is not just our own ego but rather society as a whole, or more specifically, the masses, most of whom may be needy. It provides an uplifting, almost exuberant quality to our natures, particularly those of us with the earth signs prominent in our charts, Taurus, Virgo or Capricorn. But generally we can all feel potentially more inspired, able to access our potential and, more particularly, inspire others to achieve theirs.

Now as the Sun gets involved in this aspect, it adds a more personal opportunity, the Sun being symbolic of our personality, our ego, as well as, curiously, any leader or head of an organization. So opportunity or favour from our boss, parent or leader in general may be forthcoming. It immediately boosts self-confidence, which attracts generosity from others, with a preference for fairness, good judgement and general good luck. Magnanimity in oneself and one’s benefactor or head may be available as a result. This can also imply good judgement by the law courts in favour of the masses, if not the head of state. Sometimes there is a conflict between favouring the head of a country or favouring his or her population, where one benefits at the expense of the other. Numerous heads of state are being challenged to face the music, the law courts now, like the Presidents of both Brazil and South Africa, who could both be on the verge of losing their jobs due to corruption – basically stealing from their people. So it will be interesting to see which way the sword of justice swings for them and the masses. Sun trine Jupiter could imply that the leader is given the benefit of the doubt as far as the legal judgement is concerned.

By the end of the week, as the Sun trines Pluto, righteous indignation may come to the fore, though it will bring out leadership qualities in us and the heads of state. It remains to be seen if either will use the opportunities and skills available for selfish interests or equitable and just distribution. Certainly investigative skill will be available to get to the truth, to the human motivations involved, and as long as the masses get their just share too, we and the leaders can possibly all come out benefiting from this Earthy Grand Trine. Especially if the charges against the leaders are trumped up, fabricated to bring them down by some ulterior force behind the scenes, not playing by the rules. Then the BRICS could topple because they tried to stop the NATO onslaught.

Ultimately the earth signs involved in this Grand Trine should facilitate us tapping into opportunities on the ground, and skills and resources will become available for us to further our material objectives. For the New Moon around the same time, at the end of this week, means that the Moon will also enter the Grand Trine as it conjuncts the Sun and thus both Sun and Moon will be in simultaneous alignment to Jupiter and Pluto. This means even more potency will be added since four heavenly bodies will be involved, even if only for a few hours. The Moon will indicate, possibly, the exact time of the result of this alignment manifesting to us, whether judgement or opportunity. Indeed, the New Moon moment in earthy Taurus on 6 May at 19h30 GMT (21h30 South Africa) could be just the moment that this alignment bears its greatest fruit. The Sun symbolises the head of state or boss, but the Moon symbolises the people, and since also trine Pluto here, facilitates the ability to handle and deal with and perhaps even resolve emotionally intense situations for the better by relinquishing the old and greatly improving domestic and business matters. Certainly emotional resilience will be available, along with resolve and unwavering determination to achieve your goal unobstructed. So nobody will be able to force anyone to do something they don’t wish to do, and that which is confidential will be kept secret. Thus we may never know how close we came to changing the course of our history for better or worse, because old allegiances and family ties make blood thicker than the ink of any contract or document written in law.