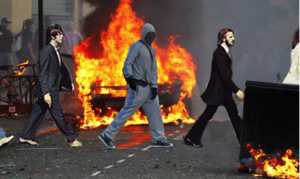 Although the long standing square 90 degree aspect between Uranus and Pluto is gradually separating, its global generational influence can still be felt. It hasn’t been exact since March ’15 earlier this year, but has come to within 2 degrees of exact again late this month and all through December ’15, and will be only 1 degree away from an exact 90 degree aspect through January ’16. These outer planets have been closely aligned since 2012, on and off and as astrologyking.com explains, they symbolise “…the most significant and most challenging planetary influence in a generation. We are living through a major global upheaval due to, and resulting in rapid evolutionary change.”

Astrologically Uranus symbolises revolution, change, invention and higher awareness. Its effects can be shocking for the status quo, as well as unpredictable. Pluto on the other hand symbolises transformation, globalization, destruction, and renewal. It’s effect is impersonal or generational, though can be ruthless, and extreme. This week’s Paris terror attack is yet another expression of this very catalytic force influencing the entire planet with its ruthless, destructive ideological war for change. The last time in history that this Uranus square Pluto aspect was with us was in the early 1930’s. This was the era of the Great Depression which culminated in WW2, via the rise of extremism and dictators orchestrating political and social upheaval. When we look at the refugee statistics, as well as the Paris terror event this week, we see circumstances that have not been in evidence since WW2. Today’s global economic recession, with its rise in unemployment was just the atmosphere that brought Hitler to power as Chancellor in 1933, during the Uranus Pluto square. Pluto is here expressed in the ruthless power of a dictator, the rise of Nationalism and the use of media propaganda to dominate the zeitgeist of the day, while Uranus symbolises the new technology available – in those days air travel. Nowadays we have the internet as the revolutionary tool of course, though the dictatorship on the rise is that of ISIS and its Sharia Law, that promotes the beheading of enemies or those opposed to the dictates of that Law. In fact anyone not submitting to Sharia is seen as worthy of destruction, so the entire world population is the enemy of Sharia in today’s scenario.

Basically the Uranus – Pluto square is a generational influence symbolising large-scale political, religious or social change and this is perfectly playing itself out in the events we see in Paris but also throughout Europe and the Middle East today. The seeds were planted over the past 4 years with the Arab Spring, and the fruit is ISIS and other fundamentalist offshoots in Africa. Juxtaposed to that we find the rise of the right wing Fascist sector in multiple EU countries. It seems war is on the rise, and whether it was engineered by a higher force to divide and alienate one against another for the sake of arms trade, or whether it is simply humanity at a crossroads, the result is the same. And although the exact planetary aspect between Pluto and Uranus is slowly waning, the death throes are being echoed throughout the streets of almost every continent. And that is what a world war is – a battle fought by numerous sides on numerous continents simultaneously, and although we have not yet officially labelled this WW3, in effect the symptoms of just such an event are already being felt.

And remember that ISIS is not the only power bent on world domination. There are others, much closer to home, who won’t express it as openly, but their plan for the New World Order has been rolling out for decades already. So this power struggle is nothing new, and is not just to be blamed on the other, some foreign shadow figure in black wielding a sword and a black flag. Rather it is with us, we are all a part of it, and it is simply playing itself out more overtly than ever now. Therefore the time is ripe for the people, the masses, the mob – another expression of Pluto as an anonymous collective force – to reclaim our power on the street and rise up to meet the challenge of dictatorial oppression and mass media brainwashing, thereby finding our common humanity and having learned from the past, refusing to allow any elitist or racist separatism to undermine our unity in diversity as one global family ever again.