As Mercury comes to a retrograde station again this week on 28 April, the Winged Messenger slows to his point of stagnation at an interesting time in history. 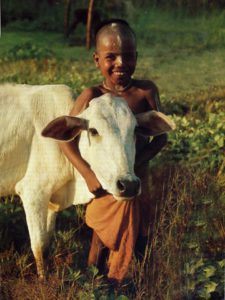 Mercury stations now in Taurus, where he will enjoy his retrograde pastimes for the next 3 weeks until May 22. And curiously South Africa, as a nation celebrates its Independence day or birthday the day before the station, on April 27, making it originally a Taurus country by birth. And that seems to align with the mood and spirit of the country as an agricultural and mining hub of Africa, with the most leisurely bureaucratic pace one could imagine, like a heavy cow, strolling to its destination with all the time in the world – “African time”, they call it. Similar to “Indian time”…. “just now coming”, “now now”. So the slowing down of Mercury now could really exacerbate the sluggish pace of the already sluggish system.

To be sure the Taurus theme is a slow, steady, materially-focused, earthy one. The land, the cows and the senses are all of primary importance to the Taurus countries and the Taurus minds; and our minds may also be able to find time to stop and smell the roses. Particularly if the wheels of industry are at their slowest too, since the economy is at such a sluggish state, with almost zero percent growth, stagflation at best. Mercury retrograde in Taurus may force us to rethink our values, re-evaluate what it means to be well-off, what real wealth is, what really has value to me in this age of the crumbling local currency, the crumbling global economy and the critical credit crunch, all meeting at this precarious time in history. House prices may not be as reliable any more, but land is always a valuable item you can hold in your hand, along with food, commodities. This is the realm of Taurus and Mercury there facilitates the traders in such stock now, stock that appeals to the senses – the eyes, tongue, ears, etc. Land means food, and cows, and stability. Cash in the hand, and the sound of the names of the divine, as they say, are the only items to be relied on. That was Bhaktisiddhanta Saraswati Goswami over 100 years ago, keeping it real by enunciating the real values, not credit with the bank and the Hollywood brand. 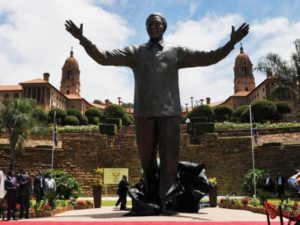 Another interesting event this week just as the Mercury retrograde starts in Taurus, is the unveiling of a 6 meter high statue of Nelson Mandela, the founder and hero of the Taurus nation of South Africa. This occurs just two days before the Mercury station, but it’s not happening in Mandela’s home country. It’s happening in Palestine. That’s right, the Mayor of Johannesburg, biggest gold mining city in Africa, Mr Tau (now there’s a name of the divine for you), is unveiling this gigantic statue in what is known as Johannesburg’s twin city – Ramallah – in Palestine. Mr Mayor said in his speech

After all, it was Nelson Mandela himself who said in 1997 that “our freedom is incomplete without the freedom of the Palestinians”. Now that is solidarity, based on the fundamental issue of land. Land ownership is as crucial an issue in SA as it is in Palestine. Still today most of Mandela’s people do not own land, have few cows, and little access, as a result, to dignity, self-respect or even economic opportunity, but at least they are free. And they vote and they can live and move where they please in their own country, their own state. The same cannot be said for the Palestinian people, who are corralled like cattle, “goyin” behind concentration camp walls, unable to move, access goods, live a normal life or call themselves free sovereign people in any way whatsoever. So it is fitting that a statue of the man most famed for giving his nation their land back, and a semblance of dignity and opportunity, be erected as a beacon of hope for some of the most oppressed and cheated people in the world today. Apartheid is alive and well and prays at the Wailing Wall, having left South Africa’s law books and constitution for ever. 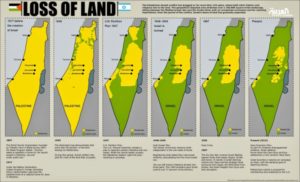 Palestine then and now

Africa belongs to the black Africans, we colonialist settlers must face the truth, admit the obvious and step aside as the African is returned to his or her land, as it is redistributed again at last. And the same is to be said of the Palestinians. They must have their land returned to them, along with their sovereignty, for they have lived there for centuries. A peaceful two-state solution is the answer, as Mandela also wanted for them. Give a man some seeds, land and a cow and you feed him for life, you empower him, with his God-given legacy. Today in South Africa people are gradually being given houses on land by the government, while in Palestine homes are systematically bombed into oblivion, while the residents are deliberately kept on “a diet”. In other words the oppressor only allows just enough calories per person to enter the territory via the locked gates, to keep them alive but not thriving. When basic human rights are trampled upon in this way, we must wonder what has happened to the value system of humanity, wonder where we lost our way in the pursuit of that which is so valuable that it is more valuable than life itself.

So during the Mercury retrograde through earthy Taurus, take time to go back and re-evaluate what life is really worth to you, what are the real values, real valuables to satisfy our senses, and what are we being allured with by the powers that be, to such a degree that even our common sense is bewildered, and our humanity is stolen from us without us even noticing, and our dignity and self-respect and self-worth are eroded, lifted by the nimble fingers of propagandists pick pocketing the heart of its true treasure, namely divine remembrance and thus the sanctity of all life, even our own, our neighbour’s and our cows.