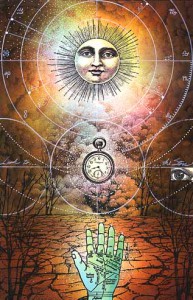 Every year the Sun makes a pass over Saturn, as it will on 30 November this year, and whatever your nature or personality type, it will bring with it a momentary mood of caution and reserve. Self-control will be available for a time, even if you felt your life to be somewhat over the top until now. Of course this is a fleeting pause in the possibly extroverted or expressive month of Sagittarius, where things can get out of hand in the jovial mood of this Jupiter-ruled fire sign.

If you are already living a rather sombre or solitary lifestyle, you may find this influence just now to be increasingly heavy. However, even the most productive scholar or writer and researcher may enjoy the solitude of the study to harness the mental self-control and discipline now available to produce masterful results. So Saturn’s sober circumstances can well be favourable to those who are able to harness the mood of the day for what it’s worth. Others of a less studious bent may have to shake off the melancholy by seeking the association of other like-minded souls to lighten their mood. Basically the exuberance of the Sun is restrained, as Saturn – the very opposite in character to the Sun – aligns with it in the sky for a day or so.

During the festive season into which we are now moving, the tendency to go overboard, to indulge more than usual, may rear its head, especially if you are in the southern hemisphere, like me, and the longer sunnier days facilitate greater extroversion and festivities. Even in the north, the approaching chilly holiday season may incline one toward an expression of celebration to ward of the chill, leading to that extra indulgent treat. So when Saturn’s momentary influence enters the zeitgeist of the day, we can actually benefit from his ability to help us look at our circumstances more seriously, and curb our enthusiasm so that it considers the long term. Those pleasures that are sweet in the beginning usually turn out to be bitter in the end, and even those that are bitter in the beginning can have a sweeter conclusion, like the self-sacrifice or self-discipline of the one who wishes to improve themselves on whatever level, and therefore undergoes the austerity required to up their game to new and improved heights. Some may however simply see Saturn as the authority figure who comes to spoil the party now, and struggle to tap into the restrictive influence provided. This is especially likely of those who are young and still carefree about life.

But for those who take seriously their life’s mission, who mean business, the greater inner strength and persistence available even if just for the day, will allow them to work harder and with more discipline than usual, and the ability to be organised will result in the time management required to achieve so much more, despite Saturn being the planet of so much less when it comes to apparent freedom of expression, size of the portion or expansion of the waistline. Saturn is popularly associated with Old Father Time, so naturally harnessing the time available with the ability to fine tune a tight schedule, is the perfect outcome of those who can make do with less, who can even do more with less as less becomes more in the long run. So be willing to shoulder the responsibility, for it will show your strength of character. Even if you are young and feel a bit lonely, or are forced to act mature, use the passing moment in the calender this week to show your superiors your potential. And those older individuals who have already internalised the parent, authority figure or wise elder, allow that archetype to guide you onward in your mature expression so that you can be a role model of reserve and mature sobriety when it is required by those that follow in your footsteps.