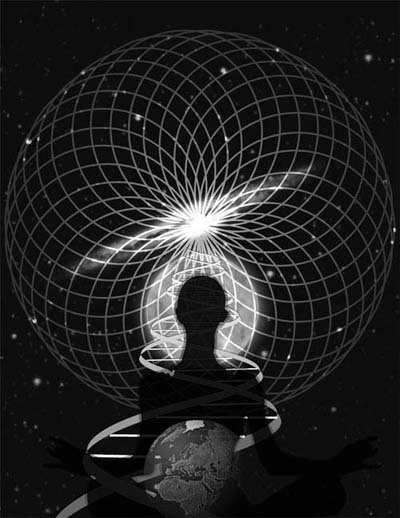 In this article we discuss a very brief and simplified history of Quantum Mechanics and will quote what the founding fathers of this branch of science had to say about Vedic influence on the development of their theories.

We are not interested in new age mumbo-jumbo. We are interested in understanding what is real and what is false. This is why we, along with all other great minds, consult the Vedic texts. Please read on…

The famous Danish physicist and Nobel Prize winner, Laureate Niels Bohr (1885-1962) (pictured above), was a follower of the Vedas. He said, “I go into the Upanishads to ask questions.” Both Bohr and Schrödinger, the founders of quantum physics, were avid readers of the Vedic texts and observed that their experiments in quantum physics were consistent with what they had read in the Vedas.

Niels Bohr got the ball rolling around 1900 by explaining why atoms emit and absorb electromagnetic radiation only at certain frequencies.

Then, in the 1920’s Erwin Schrödinger (1887-1961), an Austrian-Irish physicist (pictured below), who won the Nobel prize, came up with his famous wave equation that predicts how the Quantum Mechanical wave function changes with time. Wave functions are used in Quantum Mechanics to determine how particles move and interact with time.

In the 1920’s Werner Heisenberg (1901-1976) (pictured Left) formulated his famous uncertainty principal, which states when a physicist attempts to observe a subatomic particle, the experimental apparatus inevitably alters the subatomic particle’s trajectory. This is because they are trying to observe something that is of the same scale as the photons they are using to observe it.

Bohr, Heisenberg and Schrödinger regularly read Vedic texts. Heisenberg stated, “Quantum theory will not look ridiculous to people who have read Vedanta.” Vedanta is the conclusion of Vedic thought.

Furthermore, Fritjof Capra, when interviewed by Renee Weber in the book The Holographic Paradigm (page 217–218), stated that Schrödinger, in speaking about Heisenberg, has said:

“I had several discussions with Heisenberg. I lived in England then [circa 1972], and I visited him several times in Munich and showed him the whole manuscript chapter by chapter. He was very interested and very open, and he told me something that I think is not known publicly because he never published it. He said that he was well aware of these parallels. While he was working on quantum theory he went to India to lecture and was a guest of Tagore. He talked a lot with Tagore about Indian philosophy. Heisenberg told me that these talks had helped him a lot with his work in physics, because they showed him that all these new ideas in quantum physics were in fact not all that crazy. He realized there was, in fact, a whole culture that subscribed to very similar ideas. Heisenberg said that this was a great help for him. Niels Bohr had a similar experience when he went to China.”

Consequently, Bohr adopted the Yin-Yang symbol as part of his family coat-of-arms when he was knighted in 1947.

“This life of yours which you are living is not merely a piece of this entire existence, but in a certain sense the whole; only this whole is not so constituted that it can be surveyed in one single glance. This, as we know, is what the Brahmins [wise men or priests in the Vedic tradition] express in that sacred, mystic formula which is yet really so simple and so clear; tat tvam asi, this is you. Or, again, in such words as “I am in the east and the west, I am above and below, I am this entire world.”

This is a reference to the Mundaka Upanishad mantra (above) in which the Vedic understanding of the connectivity of living entities is put forward to help the Bhakta (practitioner of yoga) to understand the difference between the body and the living entity. How the real nature of the living entity is realized only in union with the source, the supreme being (Brahman/Krishna) through a platform of transcendental divine loving service.

3 thoughts on “How does quantum physics work, you may ask, what is it, and where does it come from?”