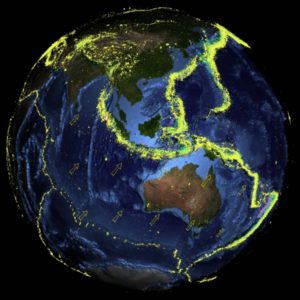 Today’s full moon is nothing unusual, but the hype generated around it has grown due to the past week’s mega earthquake activity experienced in scattered parts of the globe. To begin with, a full Moon or new Moon is described as a “syzygy” which is actually the alignment of any three celestial objects. Gravitational forces are at their maximum, so today we will feel the pull. Besides that “The same force that raises the ‘tides’ in the ocean also raises tides in the [Earth’s]crust,” according to an astronomer with the U.S. Naval Observatory in Washington, D.C. Some experts say there is nothing to worry about but others are naturally rattled.

And naturally so. When seven major earthquakes hit the Pacific Ring of Fire in just a few days, everyone is going to sit up and take notice. First a spate of quakes hits Japan’s south, not killing many but still displacing hundreds of thousands, who sit in shelters this weekend. Then Ecuador is struck by its worst quake in 70 years, killing hundreds and displacing hundreds of thousands more. The country is now a disaster zone. Just like Nepal, who still sits in a state of disaster despite their quake occurring a year ago already. And it’s a repeat of the Nepal quake that is now being feared. “The current conditions might trigger at least four earthquakes greater than 8.0 in magnitude” according to a University of Colorado seismologist. And did we even notice the other large quakes that hit Tonga, Philippines, Vanatu and Fukushima (5.8 On the Richter scale) last week? Probably not. And the smaller ones in Pakistan and Nepal? Yes that’s more activity in Nepal and more deaths in Pakistan due to earthquake activity in April so far. The already injured Nepal area is seismologically fragile, and thus we see the current recurring tremors which have resulted in quakes earlier this year, killing people in Manipur, India, and in China. It is this precariously unstable Nepal situation, now compacted by the Ring of Fire quakes this past week that have the world so concerned. From China to America, experts are awaiting “the big one” which can even bring accompanying tsunamis, as we have seen in the past.

Of course earthquakes occur all the time and this is nothing new. Even the next Nepal quake, which is immanent according to experts, could occur today or in 50 years. But now Jim Berkland, a former US Geological Survey scientist, who has already once famously predicted a major quake, reckons that mega quakes usually strike at a new moon or full moon because of the gravitation effect on the Earth, and is predicting one today, on this full moon. Well he is not far off because just last night – within 24 hours of the full moon moment – another quake did hit Ecuador. He also observes that 20 of the last 25 mega quakes have occurred during new or full moons. Due to the gravitational pull on our crust, and the fact that solid earth as well as the ocean tides are affected, what to speak of our human bodies and minds. But that’s another topic. Naturally some scientists dispute this theory. But there is another man, Franks Hoogerbeets from Netherlands, who is not a scientist, but studies planetary alignments. He released a video on his website last month already predicting a series of quakes in this part of April, culminating on the 22 or 23. And here we are. Not all his predictions in the past have been accurate but these were, and even though some remain sceptical, experts all agree that the US west coast, and the Nepal region are long overdue for another “big one”.

One earthquake predictor even takes into account the “missing pets” adverts in the newspapers, saying that more animals go missing or seem to flee just before a major quake. That may have some validity, as vague or speculative as it seems. We can only wait and see what the rest of this month holds for us seismically, while having our helmets and life jackets at the ready. After all, the quake on 26 December 2004 in south east Asia that put the word “tsunami” in our lexicon after killing 300 000 people, occurred on a full moon. And that was one of the biggest in living memory. Despite all the speculation, one thing is certain. We are living in unstable times, with natural disasters occurring so often that we have become somewhat desensitised to them. To make matters worse, our world is so politically and economically unstable too, that these disasters which leave people in ruins and rubble overnight, are not repaired, and as a result communities from Pakistan, Nepal, Haiti, Japan and now Ecuador remain in ruins for months and years to come, set back decades in the blink of an eye. 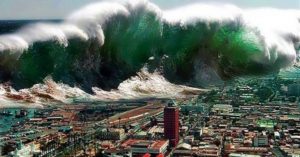 So although we like to keep a positive attitude and always hope for the best, we need to remember that life on earth is a razor’s edge. There is danger at every step, and death can come at any minute. Therefore, in this age of instability, we need to keep focused on the goal of this human form of life, namely to have the right state of consciousness at our time of death so that we can attain transcendence, go back to Godhead, and never have to take birth on this planet ever again. Unless, of course, you wish to continue the great service to fallen humanity of facilitating the liberation of all before returning yourself. Why settle for anything less?