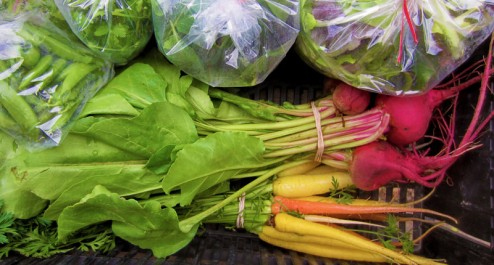 Are you ready to turn your lawn into a farm and make money at the same time? The creators of SPIN-farming—or Small Plot Intensive farming—are confident that anyone can follow their urban farming model and earn an income from farming on less than an acre of land.

SPIN farming was created by Wally Satzewich and Gail Vandersteen of Saskatchewan Canada in an online learning series at Spin Farming. Their business model and method of farming focuses primarily on growing high value crops, high yielding crops, companion planting, and much closer spacing than conventional farming methods allow; SPIN farming maximizes efficiency on small plots of land. According to the website, SPIN farming techniques make it possible to sell $24,000 or more annually from a mere half-acre of land.

Satzewich and Vandersteen created SPIN farming after six years of farming a multiple-acre rural site. They soon realized that there was money to be made by abandoning the traditional tractor and large tracts of land in favor of a rototiller, a few hand tools and smaller, more intensively cultivated plots.

The biggest advantage of SPIN farming is that it removes two of the largest barriers for new farmers: land and capital. While conventional farming methods require large tracks of land and a significant amount of upfront funding, SPIN farming requires little more than a vacant lot or a backyard, a tiller, a few hand tools, and some hard work. In fact, SPIN farming can combine several disconnected small plots of land and make them commercially viable.

One of the most advantageous aspects of SPIN farming is that land ownership is not required to start a farm. Renting, bartering, or even borrowing plots of land will suffice and this model works in an urban center, a suburb, or a rural setting.