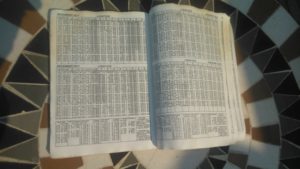 Before the days of computer software and phone apps, the most valuable tool for the astrologer was their ephemeris. It is a neatly printed out text book with tables full of columns listing the exact positions of all the planets in the zodiac. So much research and observation of the night skies via naked eye and telescopic lens or mirror, over thousands of years has gone into the ability to predict, like clockwork, where every body will be at any time in the future. By extrapolation that implies the past too. And all these positions of the bodies -at least the most important ones – are listed for every day of every year at midnight (sometimes for midday) for the next fifty years or 100 years, depending on the size of your ephemeris. So anyone can learn the astrological symbols and read the ephemeris to find out the planetary alignments on their birthday or any day for that matter. It’s always insightful to look at the alignments on your birthday every year to see what impression they give for the coming year ahead.

Traditionally in certain older cultures, astrologer priests could wield influence over their village by predicting eclipses for example, but those days are long gone. Doomsday prophets are not taken seriously nowadays. I would be interested though, to know what this year’s mass simultaneous retrograde lineup of five planets might imply. Another happens in July 2018, but then it’s less meaningful because it involves more outer planets and they go retrograde simultaneously quite often. And also their influence is more distant, symbolically more generational than personal in their effects on our horoscopes. But this April 2016, at the next Mercury retrograde on the 28th, we will also have Mars, Jupiter, Saturn and Pluto all in retrograde as well. This continues until Jupiter goes direct again on the 9th of May, 12 days later. Pluto may be of lesser significance, and it’s true that all planets go retrograde often enough, but to have a more than usual amount of them synchronise like this may bring about something noteworthy. The only planet not retrograde then its Venus. All the other personal planets (as opposed to transpersonal) are not only in retrograde, but many are moving very slowly, much slower than usual, and all except Saturn experience a complete station or stop during the mid April to mid May period in question. And Saturn moves relatively slowly anyway. This slow and stationary lineup may signify a sluggishness in progress, a pause or impasse in ventures, and it may be wise to suspend or defer any major decisions during this phase.

Jupiter, of course, has been in retrograde since January already, and that’s nothing unusual, and Saturn will station in late March, but by the time Mars, Mercury and Pluto join them in the retro dance in April/May, I can presume that much or perhaps deeper rethinking will enter negotiations. With Pluto involved we can, for instance, except more strike action amongst the masses of labour in our mines. “Strike season” may be heated this year, or should I say protracted, particularly with the mines losing billions already as demand weakens while the global economy slumps. What fertile ground for regime change during an election year. Nothing like a disgruntled proletariat to unsettle the apple cart. When negotiations reach a deadlock then progress grinds to a halt. Mars is still very powerfully placed in Scorpio for some of this retrograde time. In fact in Scorpio, Mars is reputed to be at his most potent, volatile, provocative and persuasive in achieving his desires. The Mercury retrograde will be in the polar opposite sign of Taurus. The tension could be like that of two bulls meeting head on head, butting their way with opposing demands and value systems. The New South Africa is a Taurus sun sign, amongst numerous other nations, depending on their day of independence. The 1st of May, which falls in the middle of this retrograde period, is even called “Workers Day” here, a perfect opportunity to rustle up a revolution. Or maybe not. But whatever happens something has to change. We can’t simply keep playing the same tune as we watch one country or corporation after another fall into junk status.

We may all feel the influence of the multiple retrograde in different ways according to our horoscopes. The Saturn retrograde in Sagittarius for so many months this year can already be aligned to more potential nationwide university mass action, striking and general unrest, as with last year already. Nevertheless there is a flip side to this retrograde alignment, and that is that a concomitant mass direct or forward motion also has to occur at some point, where no planets are in retrogradation, and are all sailing forwards through the zodiac. And that time occurs just after the last Mercury retrograde of 2016 ends – on the 8th of January 2017, for an entire month, until Jupiter goes stationary retrograde once again. Of course this all may mean little of importance at the end of the day, but it does present an interesting pattern for those who like to look for signs in the sky, who keep a weather eye on the horizon for the shape of things to come.