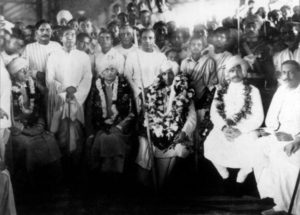 In the traditional Vedic culture of India going back thousands of years, astrology was well accepted, and in fact it was the brahmanas – the priests – who were also astrologers, doctors and teachers. They were referred to as “tri-kala-jna” aware of past, present and future, which is what an astrologer is technically, by dint of his or her ability to interpret the movements of the planets and their influence on us. Although these people were the most respected in society since they were dedicated to a life of scholarship, they would travel door to door like itinerant monks to distribute their knowledge, and may thus even have appeared like beggars, or rather humbly dressed due the fact that they did not charge a fee, but simply accepted donations for their services.

Swami Prabhupada mentions in his commentary to Volume 1, chapter 17, text 103 of the Shri Chaitanya Charitamrita, “This system was current even 100 years ago; even 50 or 60 years ago when we were children, such brahmanas would visit householders like humble beggars, and people would derive great benefit from the mercy of such brahmanas.” In other words the astrologer was never a businessman. Astrology was never meant to be practised as a business. Nor for that matter were any of the brahminical arts, like medicine, priestly services, counselling, or even teaching. All these services were offered up to society merely in return for the basic survival needs, like food, clothing and shelter, even if the brahmana himself was married with children of his own. The scholar was the most respected person of the society because he or she was understood to be the wisest, due to scholarship, and the symptoms of wisdom include the capacity to transcend lust, anger and greed. Realized wisdom empowers one to rise above the need for profit, adoration or distinction. Even the school teacher was wise enough to not even require a salary, but simply taught for the love of it, with the mature understanding that this was a worthy service, and that his survival needs would be met by the community in which he taught.

Contrast this to today’s capitalist world where nothing is done without the maximum profit squeezed out of the deal. Even the university chancellor or dean receives a salary on par with the country’s president. Still worse, some so-called pastors refuse to even bury their congregation until all tithes are paid up. Charlatan evangelists dupe their congregation into parting with their earnings and then end up living the most lavish lifestyles, even owning their own private jet. And people fall for this firstly because we have been indoctrinated into the capitalist mentality, and secondly because people are fearful for their spiritual lives, and take shelter of what should be a source of salvation, yet due to gullibility, naivety and blatant criminality of modern day priests, are being robbed blind. So as an astrologer, or scholar, counsellor or priest, the symptoms of wisdom should be self-evident in one’s character. And the enquiring citizen should judge the validity of the astrologer by their behaviour. The veil of illusion is so thick over us all in this modern capitalist age, that we are no longer able to discern what true wisdom is, because we have been taught to see everything as a commodity, we have been taught to only value something if the maximum personal profit can be squeezed from it. And if someone has to suffer because we refuse to offer our services for less, then let them suffer. In fact medical staff regularly go on strike in my country, regardless of the fact that patients are going to die, just so that they can get their pound of flesh. This kind of gross exploitation, greed and abuse of the system, and our fellow humanity, has been brainwashed into us in the modern age, where the Hippocratic oath is as outdated as Latin, what to speak of Sanskrit.

Therefore it is the duty of every intellectual or educated scholar of the healing and educating arts to live up to their position as a person of wisdom, by setting the example, cultivating an attitude of service, and thus reversing the trend of glorified greed and abuse by showing what it means to have risen above the allures of gold and soft pillows. For if society is left to trundle down this road of selfish capitalist greed above service, we will soon all find ourselves in a treacherous ditch without the saving grace of a good Samaritan anywhere for a thousand miles, simply because we ourselves have not bothered to train our children to be normal charitable conscious human beings. Swami Prabhupada goes on to say “If they are actually trained as perfect brahmanas, they can save society from rogues and ruffians; indeed people can live happily under the protection of qualified brahmanas… Unfortunately some people are now claiming to be brahmanas simply by birthright, with no qualifications. Therefore the entire society is in chaos.” The system may be rotten, but by purifying ourselves in consciousness by using the sword of knowledge to cleave away the unsavoury attitudes instilled in us, we become a beacon of light for the rest of humanity. And where there is light, there can be no darkness; where the torchlight of wisdom shines, the illusion of the dollar before duty will fade away into history.